On Saturday, May 25th, Scout Troop 686 arrived from Littleton, Colorado to experience a week of high adventure on our catamaran. The first couple of hours were spent distributing luggage, divvying up snorkel gear, and explaining ship side operations such as safety (life vests, fire extinguishers, MOB, etc.), conservation (water and electricity), general ship life (use of heads, allowed spaces/places, galley usage, etc.), and daily duty rotations (cooking and cleaning).

Once everyone was settled and most questions answered, we got underway. Our first planned stop was Mermaid Reef where we wanted to do the swim test but it was too rough so we headed for Matt Lowe Key. We anchored and everyone jumped into the water to swim around the boat twice. Everyone passed and we were good to go.

Day 2
The scouts had had a long trip so we let them sleep in and have a late breakfast. Once we hoisted the sails we headed north along Man-O-War Cay to Fowl Cay Reef for a snorkel.

From there, we made our way around Fowl Cay and anchored off of Scotland Cay. The scouts wanted to play cards but hadn’t brought any. One of the adult leaders produced a pack and the evening was saved. Except, it wasn’t quite… The pack consisted of some rather odd cards. There was a t-shirt size set, a random numbers set, and one more. Undeterred, the scouts took some pens and relabeled the cards into a regular set from 1 through ace.

We managed to play some Texas Hold’em but it was a bit slow going since we had to figure out what the scribbles meant on each card. I remember “10 S” wasn’t so bad but “Q C” took some thinking. My head started to hurt so I left the table to do something easier, like inspect the silverware drawer.

Day 3
We had breakfast and motored north to Canes Cay where we anchored and dinghy’d everyone to the Secret Beach between Scotland Cay and Canes Cay. The beach is actually  a beautiful, shallow sandbar between the islands and perfect for hanging out and wading around. The water is crystal clear and the sand is the same pink stuff made famous by Harbour Island’s PR team.

After lunch, we sailed towards Great Guana Cay. On the way, the fishing rods were put in service and Steve conducted a lesson in marlinspike seamanship (tying knots). Everyone was dinghy’d to the dock at Grabbers. From there we made our way to the other side to check out Nippers and the beach. There was a good-size surf so we dropped the idea of snorkeling the reef and played in the waves instead.

Playing in the waves got us all hungry so we reconvened to Nippers for showers and french fries. Nothing like salty fries after drinking lots of salty water.

It’s just a short walk from the dock to the beach and back but there are some interesting sight along the way such as this poison wood tree. I need a sign like that for the one we’ve got at home. 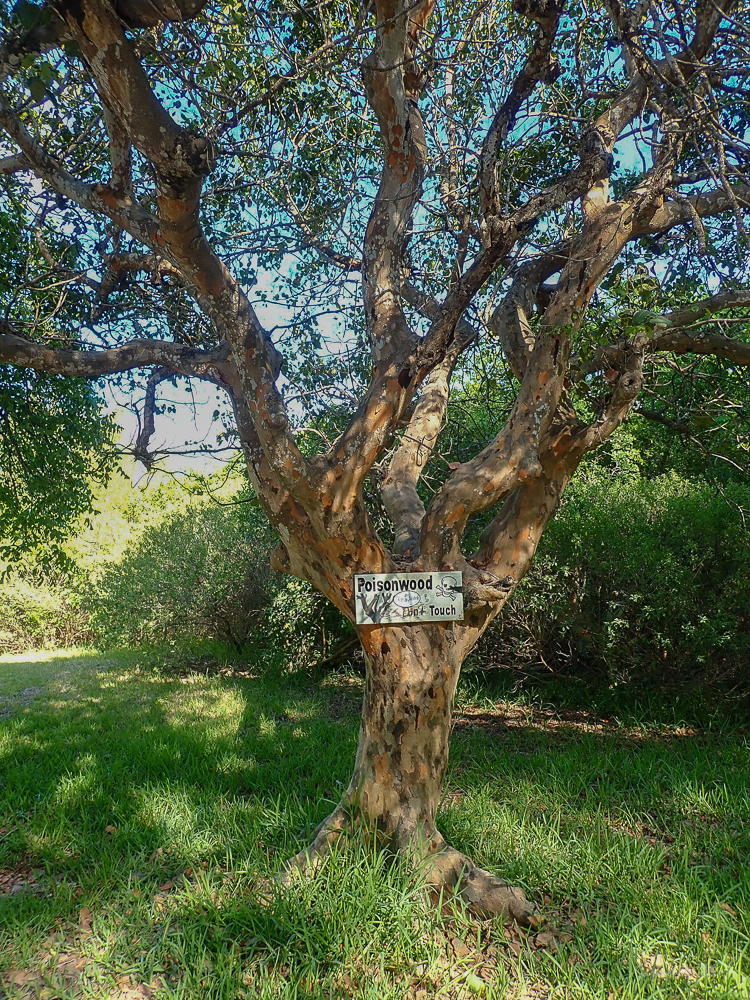 Waiting for our ride back to the boat: 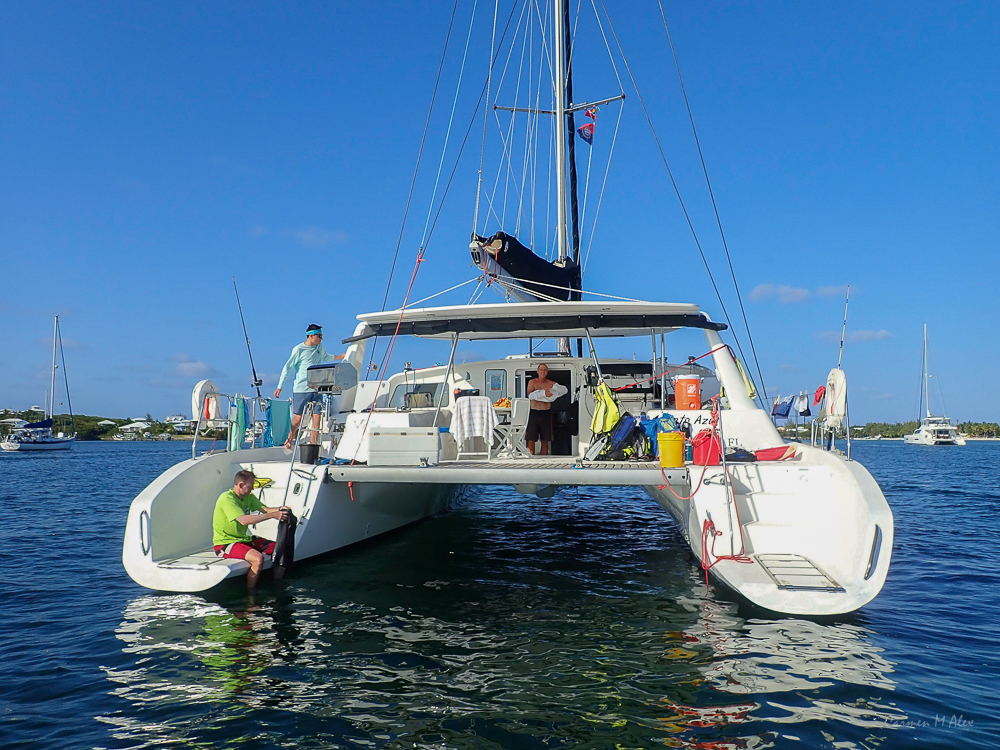 Later, we sailed north to Bakers Bay where we dropped anchor, had dinner, watched the sunset, and spent a quiet night.

Day 4
We continued north, towards the tip of Great Guana Cay to snorkel a reef near Gumelemi Cay.

In the afternoon, we motor-sailed across to Treasure Cay, home of the famous $5 cinnamon buns. Various volunteers were assigned helm duty and the rest of the crew was pressed into service to help with lines.

At Treasure Cay, the scouts explored the town a bit, then crossed to the other side and hit the beach. The grocery store was open so we all did some shopping, most notably a real set of cards.

In the late afternoon, we sailed south, tacked a few times, and anchored at Water Cay. Again, the scouts (at least the ones that weren’t busy with card games) were pulling sail duty, we might have even managed to get some hooked. The fishing rods were also out but, again, we weren’t blessed with much luck when it come to catching anything. Good thing the fridge, freezer, and pantry were stocked with lot’s of food groups.

Day 5
We continued to sail south, past Marsh Harbour, and on to Elbow Cay. We dinghy’d everyone to the lighthouse and across the bay to Hope Town.

We motor-sailed south to Tahiti Beach, where we anchored for the evening. Walker took some of the scouts to the sandbar/beach, while the kitchen duty crew prepped dinner.

Day 6
There were requests for some more snorkeling, so we had an early start and motored from Tilloo Cay to Tavern Cay, where, according to our Sea of Abaco guide, there was a nice little snorkel spot with lot’s of fish. One rock was called the fish hotel so we had high expectations. Unfortunately, there was nothing to see and not one fish to speak of, despite several turtle sightings when we arrived.

We quickly pulled anchor and headed north, towards Mermaid Reef, on the backside of Marsh Harbout for a last snorkel. 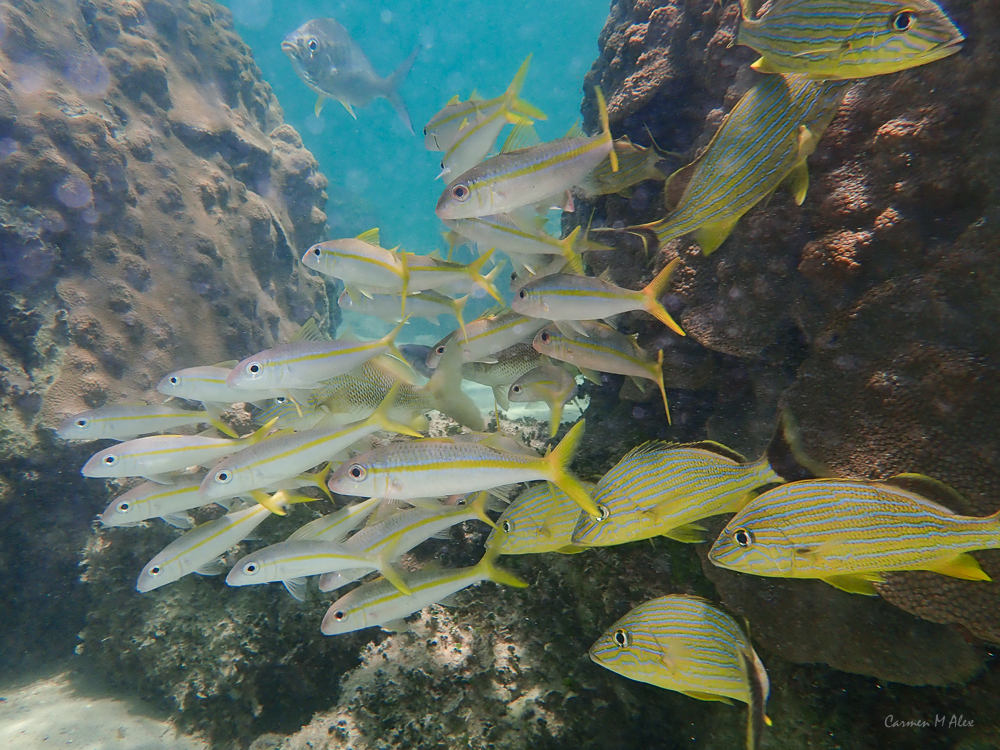 A contingent of fish rushed our way when we got close to the outcrop. Sergeant major greeted us, ocean trigger confronted us, and French and white grunt followed us around. Mermaid Reef surprised and delighted with a multitude of reef fish well habituated to humans, most likely through feeding. The reef itself is a strange collection of previously crumbled but currently recolonized and fairly healthy mountain star coral heads. I saw only a handful of sea fans and much less algae than on the other reefs in the area. I also saw several fish species I had not seen at any other reef so far and I was pleased to add them to my collection of fish observations.

This was our last reef snorkel and I was determined to see everything so I could remember every fish and coral. Mermaid Reef is home to a surprising variety of reef fish species given its small size. The appearance of a pair of mature midnight parrot fish was especially exciting as they were fairly large.

At 14:15 we docked at W6 to clean the boat and restock supplies–the week of high adventure came to an end.

“If you guys gamble with cheerios you need to take it outside.”  –John

“I’m only tired because I didn’t sleep ‘til ten.”  –Braeden

“Sometimes you have to cheat to win. It’s still fair and square.”  –Nick or AJ or ??

“Do you understand the thought process going through my brain piece right now?”  –Walker