This post could have been titled in many ways, such as “Don’t try this at home” or “How to train your pet Stingray” or “Taking selfies with stingrays”. They would all make good, descriptive titles.

Except, none really communicates what it feels like when a school of stingrays, several larger than moi, decides to get up close and personal. Real close. And real personal. 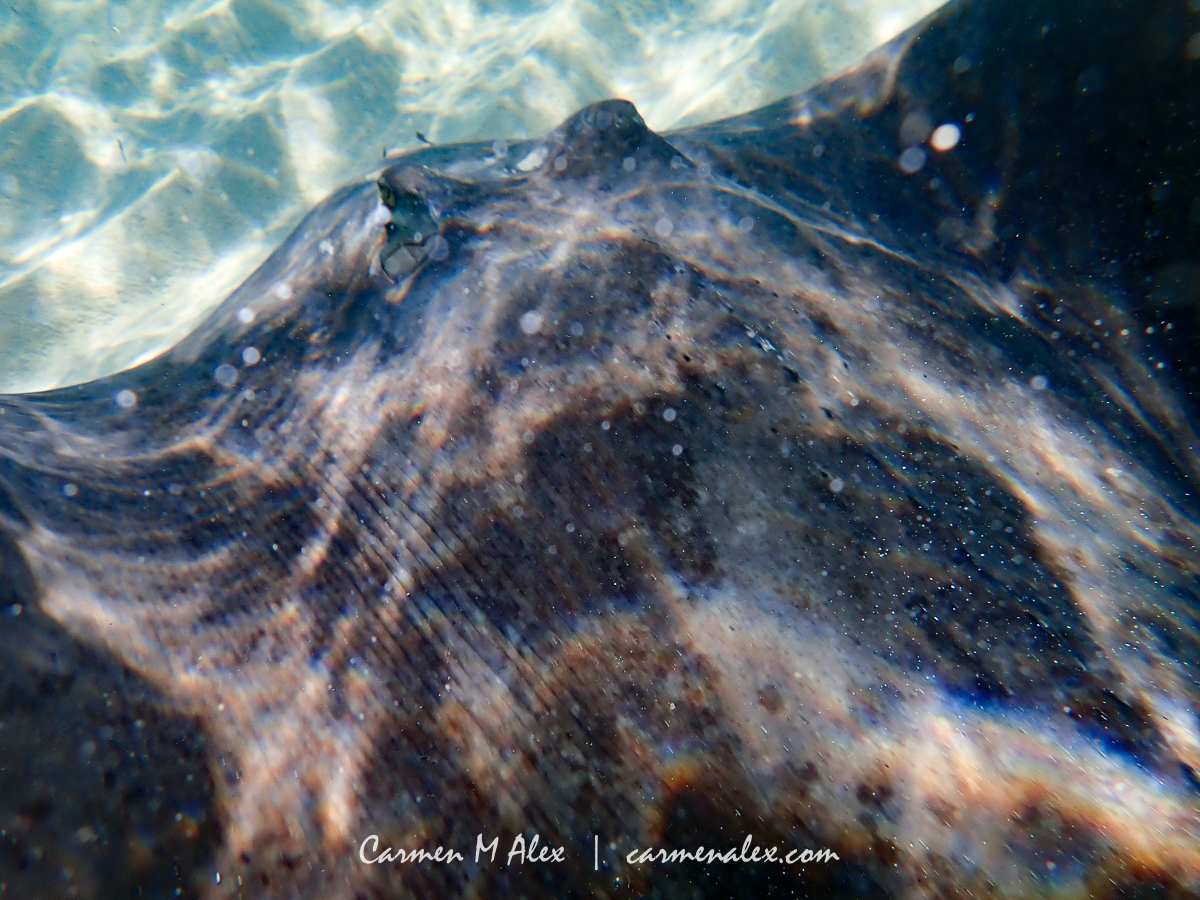 It was our last day cruising the Sea of Abaco before racing back to Florida, ahead of Hurricane Dorian. Eric, one of the other BSA captains, had told me about a small bay where tame stingrays roamed. This sounded exciting and I put it at the top of my sightseeing list, right below Sally’s request to visit the swimming pigs. The weather had already gotten a bit volatile as Dorian was approaching and we nearly left a day early. At the last minute, the weather cleared and we decided to stay one more day.

After successfully explorations along the east end of Manjack Caye, we headed west and anchored outside Eric’s bay and motored in. The water was calm and crystal clear. During the initial snorkel, we only rustled up a few disinterested rays that were resting on the bottom, under a cover of sand and seagrass.

Hoping to drum up more enthusiasm, I swam back to the boat and opened a pack of frozen shrimp that had languished at the bottom of our freezer at home since we’d received them from a friend an eon ago. I’d kept them in case I’d need to feed some rays one day.

Plop! The first pink popsicle went in the water… Nothing happened. Plop, plop! Two more followed… still nothing so I took a handful and threw them in, as far as I could. Cleary, no one was home so I jumped back in to explore the middle of the bay where the water was a bit deeper and could prove a hiding place for the alleged rays. Maybe they were sleeping somewhere. Or maybe they weren’t here at all.

The bay was bigger than I’d thought. Halfway across, I looked back to see how far I’d swam. Steve and Ronnie were standing in the shallows, next to the dinghy, surrounded by churning water. I squinted against the sun. They were hand-feeding a frenzy of rays! I swam back in a jiff, readied my camera, and watched from a safe distance.

I’m not sure what gave me away but suddenly the rays lost interest in snacking on good old Florida Keys shrimp and instead decided to descend on me—en masse. Why?? I had no food. I was wearing purple swim shorts and a white swim shirt. At the time, I gave no thought to my outfit, but in retrospect, I cannot help but wonder… Did they see a giant, tasty, pinkish shrimp??

We’ll never know. Regardless, a moment later, all I saw were white stingray bellies all around me and I freaked. I was in four feet of water, knees on the bottom and head underwater to see through the mask, snorkel in my mouth. It was hard to dodge the rays from this somewhat awkward position and I kept losing my balance trying to not step on one (or ‘knee’ one).

More and more rays descended on me. I didn’t know how to fend them off or how to get away without stepping on one. I flailed and squealed and splashed like a frantic chicken about to be eaten by a gator. I was covered in ray and I had rolled around so much I couldn’t tell which way was up.

I’m not sure what I thought was going to happen. At first, all I could think about were the serrated spines along their tails. Steve Irwin also came to mind—but just for a second. Only a school of sharks would have been scarier. They are in the same family but the difference is the teeth. Still, tame stingrays just aren’t a thing. Not really. 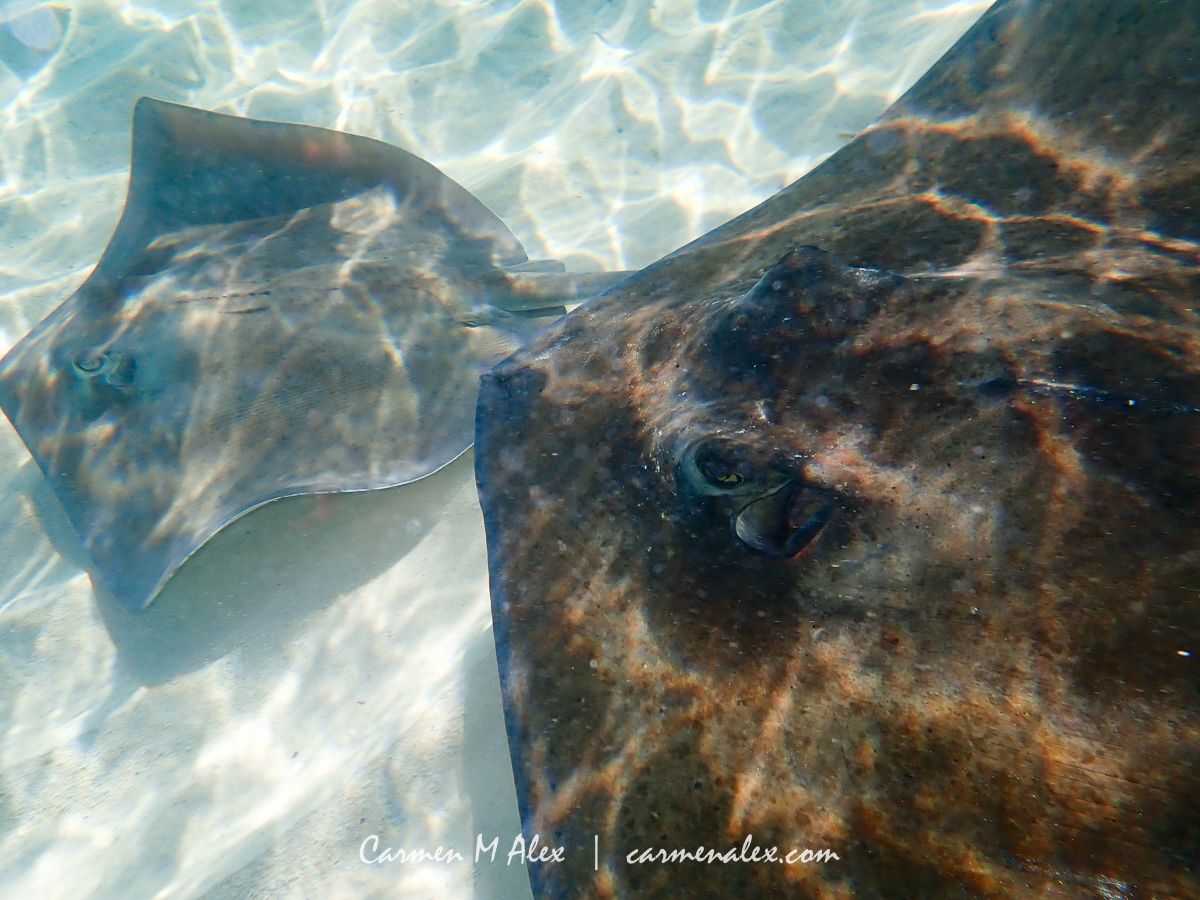 The rays must have gotten tired of my frantic dance and they calmed down. Slowly, they lost interest and floated away, one by one. I tried to compose myself and straightened up. My head out of the water again I heard Steve, Ronnie, and Sally cracking up just a few feet away. Thanks, guys.

In the past, my experience with rays had been limited to the occasional, somewhat distant sightings on or near a reef, and a flippered effort to keep up long enough to get a halfway decent, long-distance shot of the disappearing creature.

In contrast, having a ray approach and get frisky was unprecedented. Having several rays approach for a group hug was both panic-inducing and exhilarating. And definitely not for the faint of heart, to quote Sally. 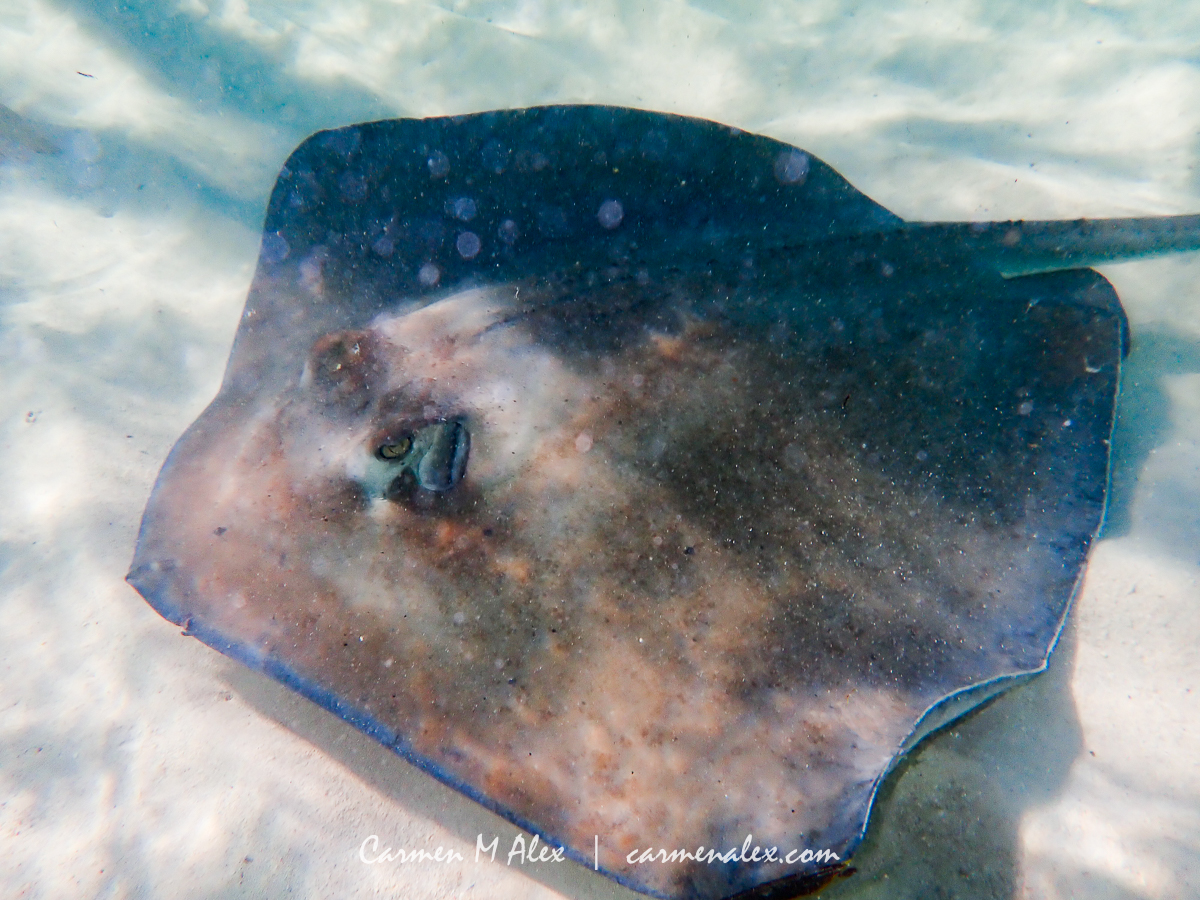 Calm again (sort of), I noticed the rays appeared to be in a circular holding pattern, cruising by at regular intervals. As long as they kept a bit of distance I was okay. Occasionally, I still had to fend one off with a gentle shove of my fin. Beyond that, I took pictures and enjoyed the show.

I didn’t get to relax for long, though. Steve and Ronnie, like a pair of juvenile troublemakers, decided to throw shrimp at me and, of course, the rays followed. I was the only one not laughing. Way too many rays jostling for shrimp next to me, under me, on me, yet again. This time, I decided to stand up, out of the water. I still shooed some overly friendly shadows along but breathing freely instead of through a snorkel, helped a lot. Or maybe it was that the details looked so blurry through the filter of a reflective sea surface.

For a bit, I stopped taking pictures and instead concentrated on relaxing and letting things happen. With a little mental zen and enough time to contemplate this improbable encounter, feelings of humility and gratitude replaced panic and fear.

It’s doubtful, these are the kind of rays that come just for the food. Long after we’d run out of frozen Florida Keys shrimp, the shy cousins of sharks kept swimming circles around us, often sideswiping us with their sometimes sizeable wings in the most gentle, friendly way imaginable. It was almost as if they were stroking us to communicate friendliness, like an inter-species bonding ritual.

As if they wanted to let me know that there was no danger, only curiosity, and playfulness.

You could argue, of course, that these are wild animals and the only reason for those return visits was for more food. I get that. Animals aren’t dumb or inefficient. Once the food runs out they usually can’t be bothered to make another appearance, certainly not numerous ones.

Trying to adjust some more, I took my fins off and stood there, head out of the shallow water, and watched the larger rays swim past and the smaller ones sometimes squeeze between my feet, still looping around our end of the bay. I got used to the soft, now-familiar underside of their wings, as they continued to smoothly swipe along my legs during each successive visit. I found myself relaxing and enjoying each moment.

Did I mention how soft the white underside of a Southern stingray is? It’s silkily smooth, not sticky or weird in any way. I have this light-gray plush microfiber blanket on my couch and that is what the rays feel like as their wings undulate over my legs. It would be comforting, if it wasn’t so remarkably unusual.

Also, the rays don’t mind if one strokes their skin. The top side is a bit less smooth and a bit more slippery than the underside. More like a regular fish. It felt amazing to hold out my hand and have the rays float up  and meet my high five with a soft wing.

We’d been there long enough to start recognizing some of the rays by color, shape, and size. There was medium-sized Stumpy 1 and much smaller Stumpy 2. Both had shortened or missing tails. Then there was Big Kahuna with a wingspan of five or six feet (okay, minus 20% due to refractive index). There was Brownie, his dermis less dark and more chocolate-colored; and then there was Big Momma—not as large as Big Kahuna—but big enough to give me a good fright at first. Now, I tried to locate her each time the rays returned.

The sun had long passed its zenith but I didn’t want to leave. I looked toward the beach to see if there was room to build a cottage near the trees. Sally had found a warning sign up on the beach so I went to check it out. The sign announced that the sharks, turtles, and rays were tame and that harassment would result in a $5,000 fine or prison. I’m not sure who would enforce this but I was happy to see that somebody cared enough to put up the sign.

I’m generally of the opinion that wildlife should stay wild and that there is no advantage for any species to get close to us humans. Wildlife encounters often do not end well.

And yet on this day, I was reminded that we don’t have to always be mere bystanders but that we are, in fact, part of nature. By allowing this experience to happen, by interacting with these usually elusive wild creatures, I’m reminded of my place in the greater web of life. Not a master but a humble participant.

Initially, I thought I’d never again wear purple clothing if I came back here but now, after processing things, I have to say I’ll probably wear all pink if it gives me a chance to experience this again. I didn’t get bitten. I didn’t get stung. Every single ray was the most benign creature imaginable.

“Would you like one as a pet?” Steve asked me when I finally returned to the dinghy.

All I could do was smile and nod enthusiastically. I had no words. My brain had ceased any rational thought and allowed me to just be, to let me feel, to allow the beauty of the day to connect me to nature without intellectual analysis. This remains one of the most amazing wild encounters of my life.

And I cannot help but think that maybe we aren’t so very different and removed from the other wild creatures in the animal kingdom that we cannot sometimes communicate enough goodwill to allow us to come face to face without fear and repercussion and look each other in the eyes, for the briefest of moments, and experience simple joy and harmony.

What if more people had the chance to experience the wild—both landscapes and creatures? Every encounter with nature reinforces my belief in being a privileged part of nature’s complex system. We may play important roles in special equations, but we are probably less important in the general one and lucky to be part of this crazy cosmic coincidence.

Want to check out the experience? Here’s a short video.