The two craziest nights on the water in the Florida Keys are here. Tonight, at one minute after midnight, a large number of bullynets and hoopnets will be unleashed on the unsuspecting lobster population that has had almost four months to recover from and hopefully forget about the last open season. And this year, I will be in a boat, out on the water, right along with all the other hopeful boaters, supporting my friends, and yes, hoping for some yummy lobsters to enjoy tomorrow.

In past years, I would be the first one to tell people to stay away from the water during those manic two days that are the mini- or sport season. Every year, on the last consecutive Wednesday and Thursday in July, a good 50,000 visitors come to Florida to participate in the great lobster hunt. More than half of those crustacean hungry hunters  come all the way south to seek their luck in the Florida Keys. The two-day extravaganza was designed to give recreational divers a chance to catch some lobster before the official or regular season starts and the commercial boats go out and litter the seafloor with traps and the sea surface with styrofoam buoys that make boating in the Keys an even more challenging experience than it already is.

So to start the evening, Steve and I took the boat to the bay side to tie it up at Pascale and Beau’s dock. We had dinner together and enjoyed Beau’s delicious soft tacos. Pascale took us home, Steve passed out on the couch for a couple of hours and I started my blog. At 11pm we grabbed a few items, and left the house, completely unprepared and happy to leave the logistics up to Pascale for our first ever Florida spiny lobster adventure.

Driving out onto the Bay in the dark was exciting (especially since I wasn’t driving) and all we could see were other boats clustered around some select areas. Pascale guided us toward the Cowpens Cut, an area just south of Tavernier Creek. We joined the waiting boaters there and started to play with our lights. 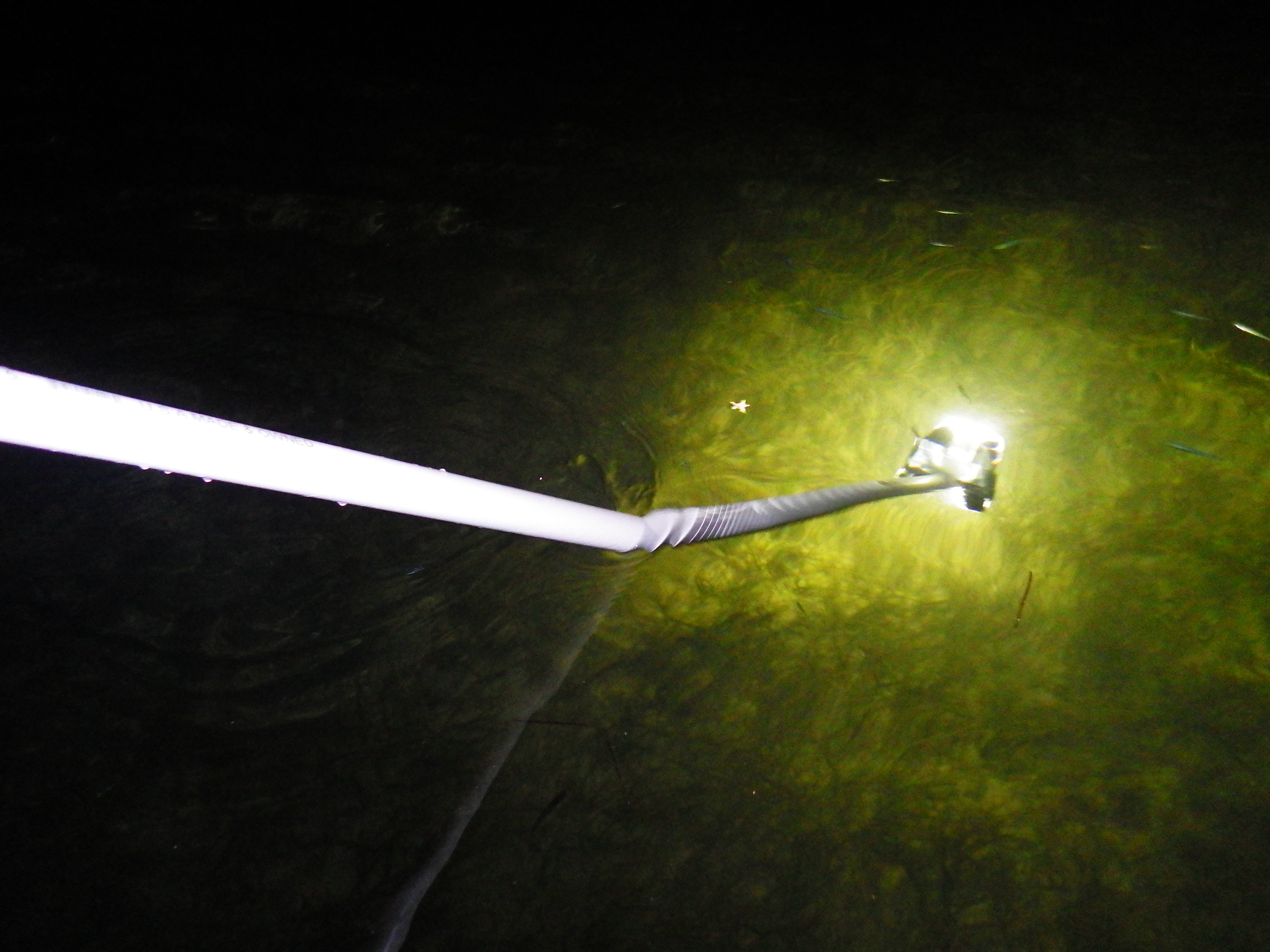 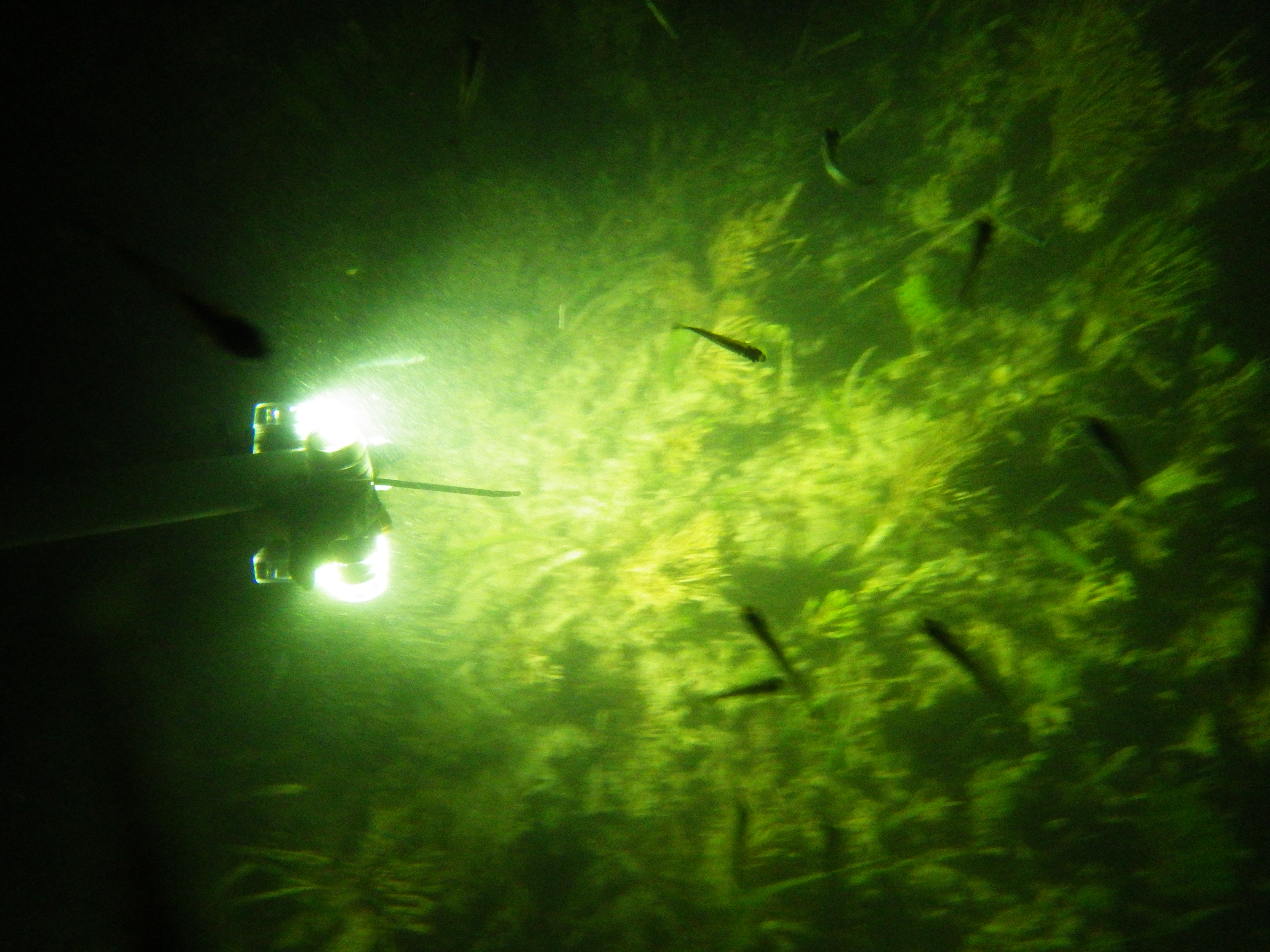 We hung out in the general area, counting down the minutes until my cell phone clock read 12:01. And off we went in search for any intrepid lobster that would leave its home crevice and wander the seagrass flats in search for other, smaller crustaceans to nibble on.

As it turns out, bullynetting is not as easy as it sounds. The current was ripping and even though we did see a few of the spiny fellows, it quickly became clear this was not going to the quick catch we thought it would be. I learned a few things that night, including slack tide is a good time to go. That way you won’t drift over and past your pray so fast you can’t find the critter again. Also, good lighting is key. Some of the other boats looked like miniature sport stadiums, with flood lights affixed along the sides of the boat for maximum all-around visibility. Several times we didn’t need our own lights because another boat’s lights lit the scene up so bright you could easily see 10 yards of bottom. 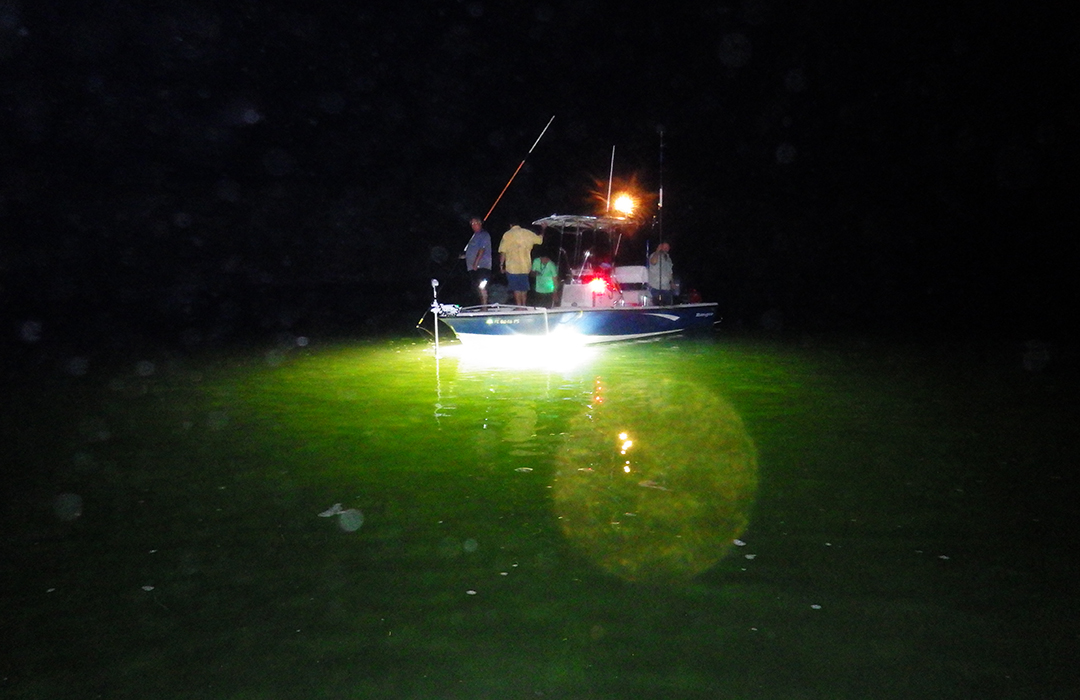 People were yelling and laughing and generally having fun without getting in each other’s way or jostling for position. It all seemed pretty organized and safe and nothing like the dangerous craziness I’d heard about. We managed to catch three of the lobsters we saw. Actually, Pascale had the bullynet and she caught all three. Steve and I switched holding the lights and driving the boat and Beau kept busy giving out advice and other commentary.

Overall, we had a blast. We got home around 2:30am, tired but excited and definitely ready for more. I didn’t get a picture of our three friends in the cooler. They were jumping around too much to leave the lid up long enough to take a picture but I took one the next day before tossing the tails into a pot of boiling water. 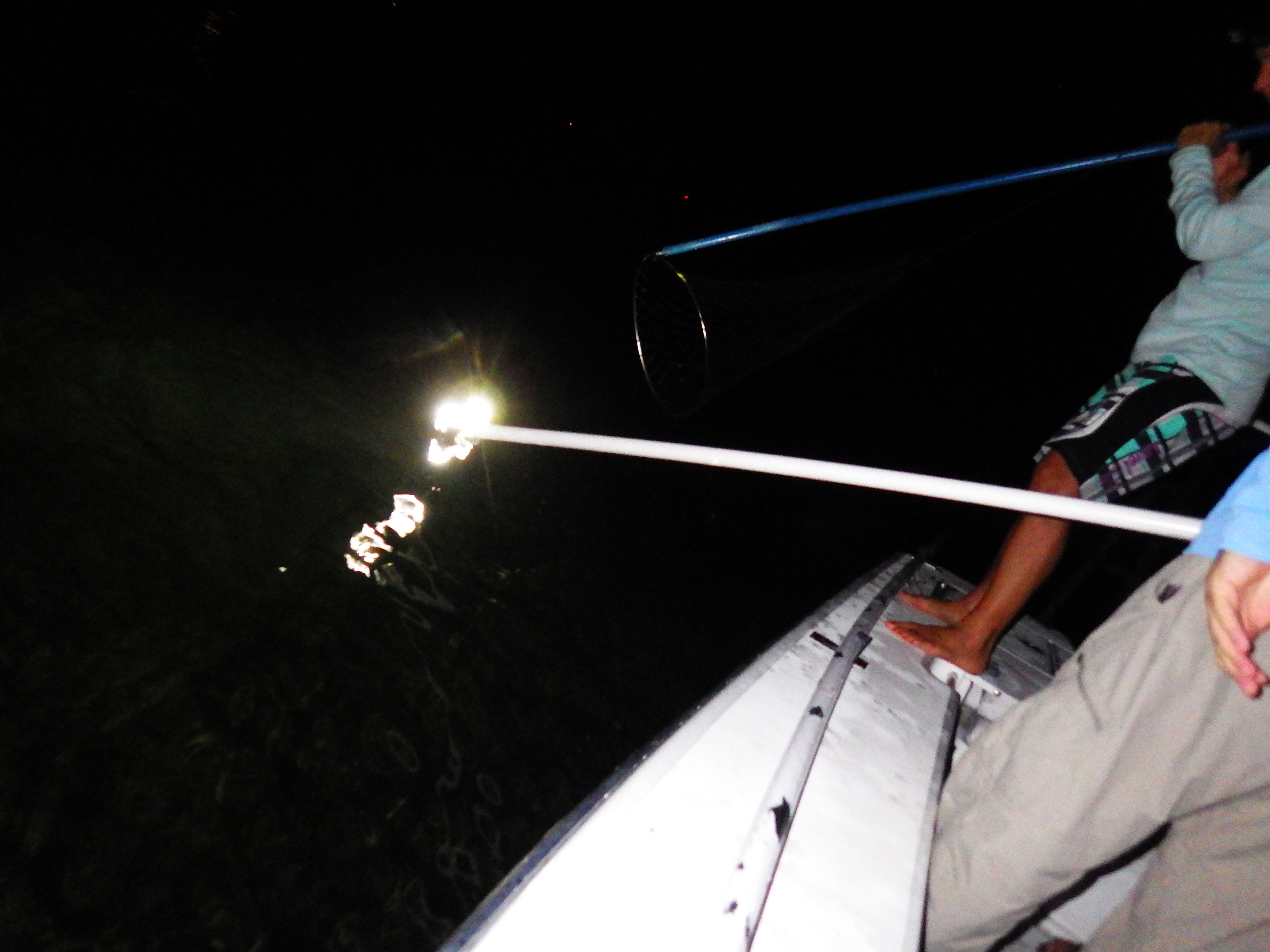 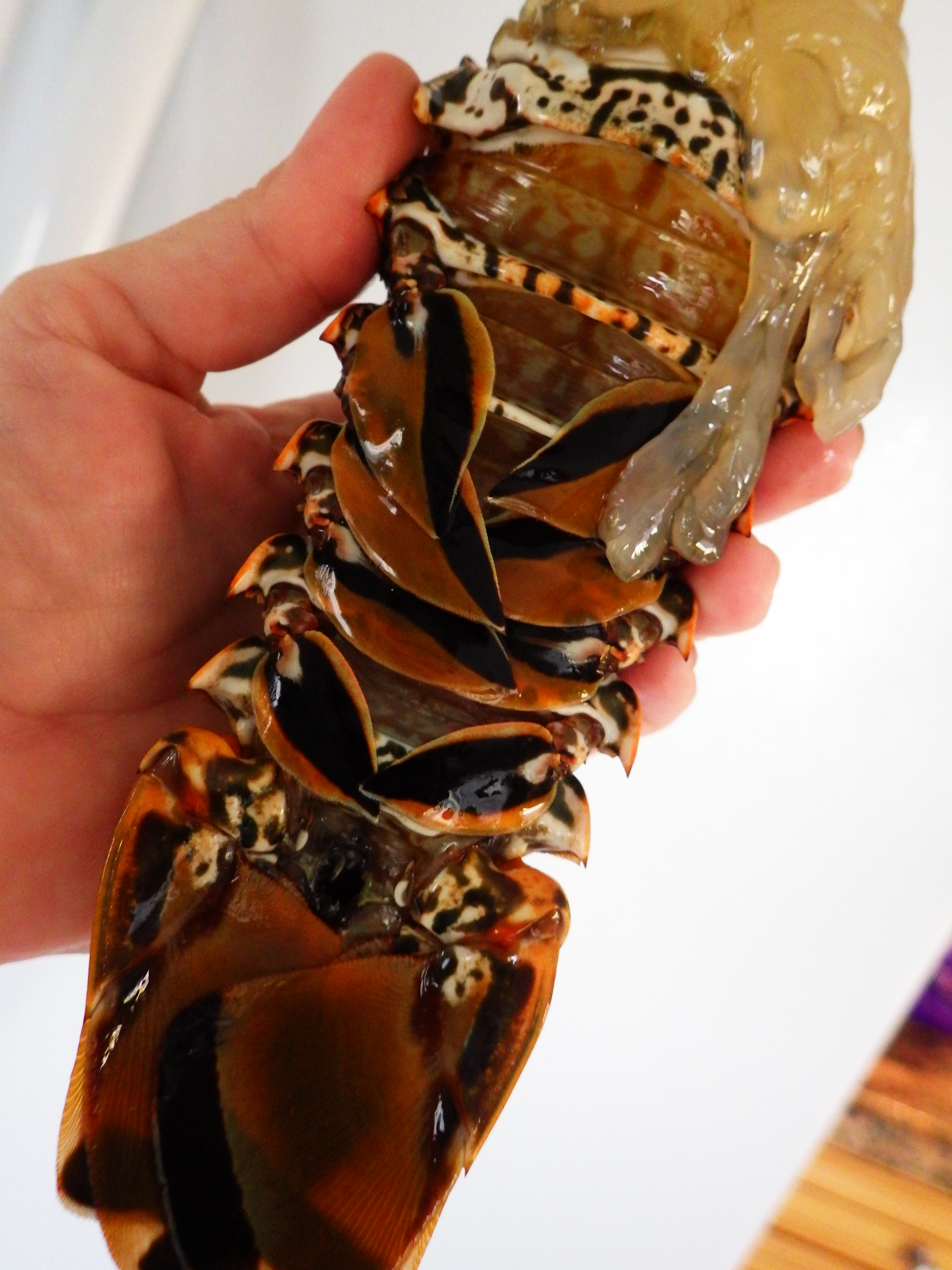